By Cole Christensen | Fusarium, News, Seed Quality Information | Comments are Closed | 29 March, 2021 | 6
print
Over the years, the prevalence and geographic distribution of Fusarium graminearum infections in the province have changed drastically. We have developed maps based on the samples that we test at the lab to help track where Fusarium graminearum is, so that producers and others in the industry can make decisions based on evidence. The maps show the percentage of samples that are testing positive for F. graminearum in each county or MD. Because the plate method is not as sensitive as the DNA method, but many samples are tested only with the plate method, a sample is considered to be positive only when F. graminearum is detected with the plate method. If a sample tests positive with the DNA method, but the plate method returns a 0% result – the sample is considered negative for the purposes of these maps.

Prior to 2012, F. graminearum was primarily detected only in Southern Alberta counties, South of Calgary. In 2012 we detected F. graminearum throughout South and Central Alberta, but not yet in the Peace Region. This continued until 2016, when levels of F. graminearum reached their peak with just over 20% of samples testing positive from across the province (1 in 5). The highest % of positive samples was still coming from Southern Alberta, the MD of Taber being the focal point with about 84% of samples positive. The counties along the Eastern border with Saskatchewan are showing higher % positive and lowering as you move west. In 2016 we also started to detect positives in the Peace Region with several positive samples from MD of Smoky River and one from Mackenzie County. 2017 was a relief from 2016 as levels across the province dropped due to the lower amount of precipitation received over the growing season. In 2017 Southern Alberta is no longer presenting significantly higher amounts of F. graminearum. The highest percentage of positive samples in 2017 is now coming from Northwest of Edmonton: County of Barrhead and County of Westlock. 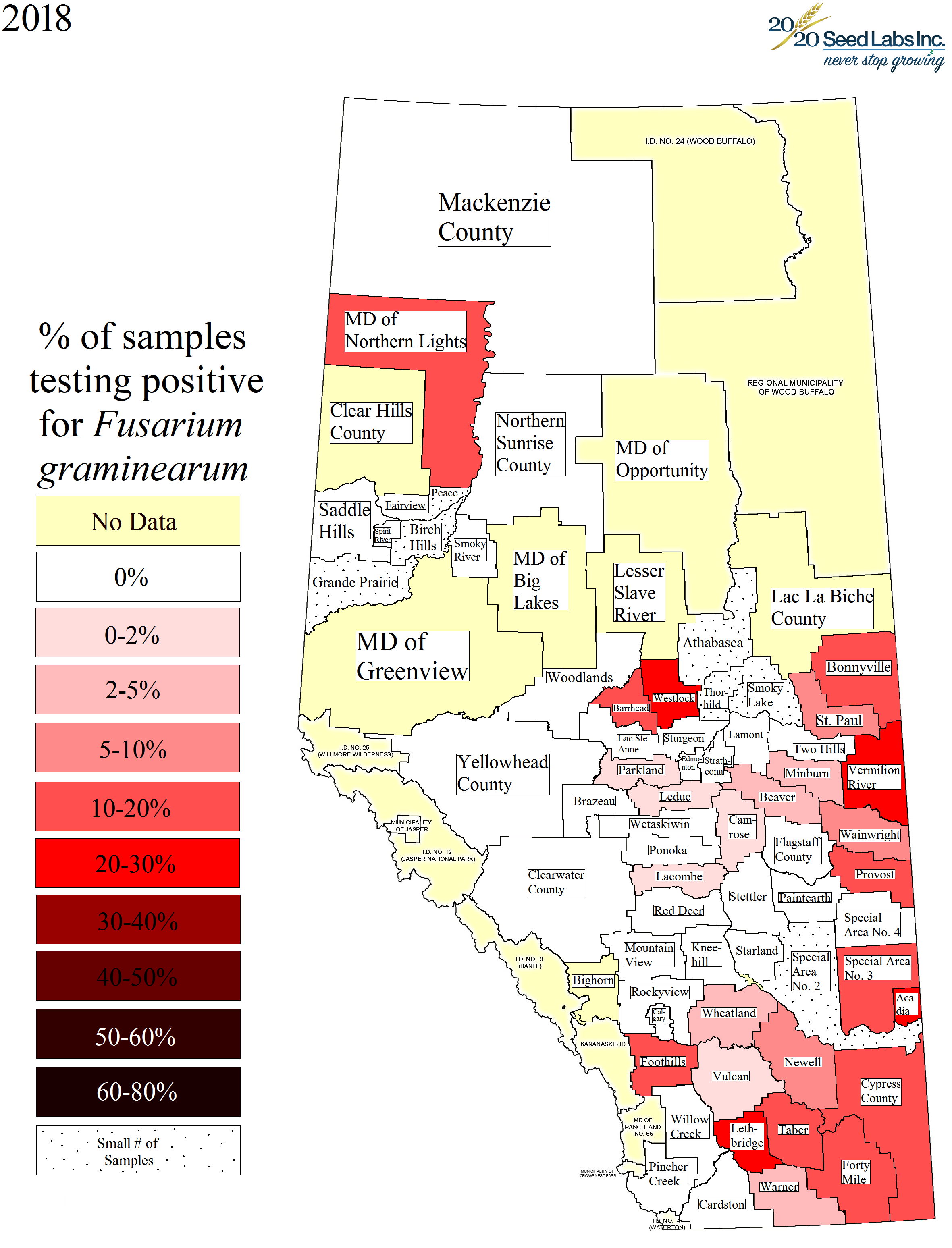 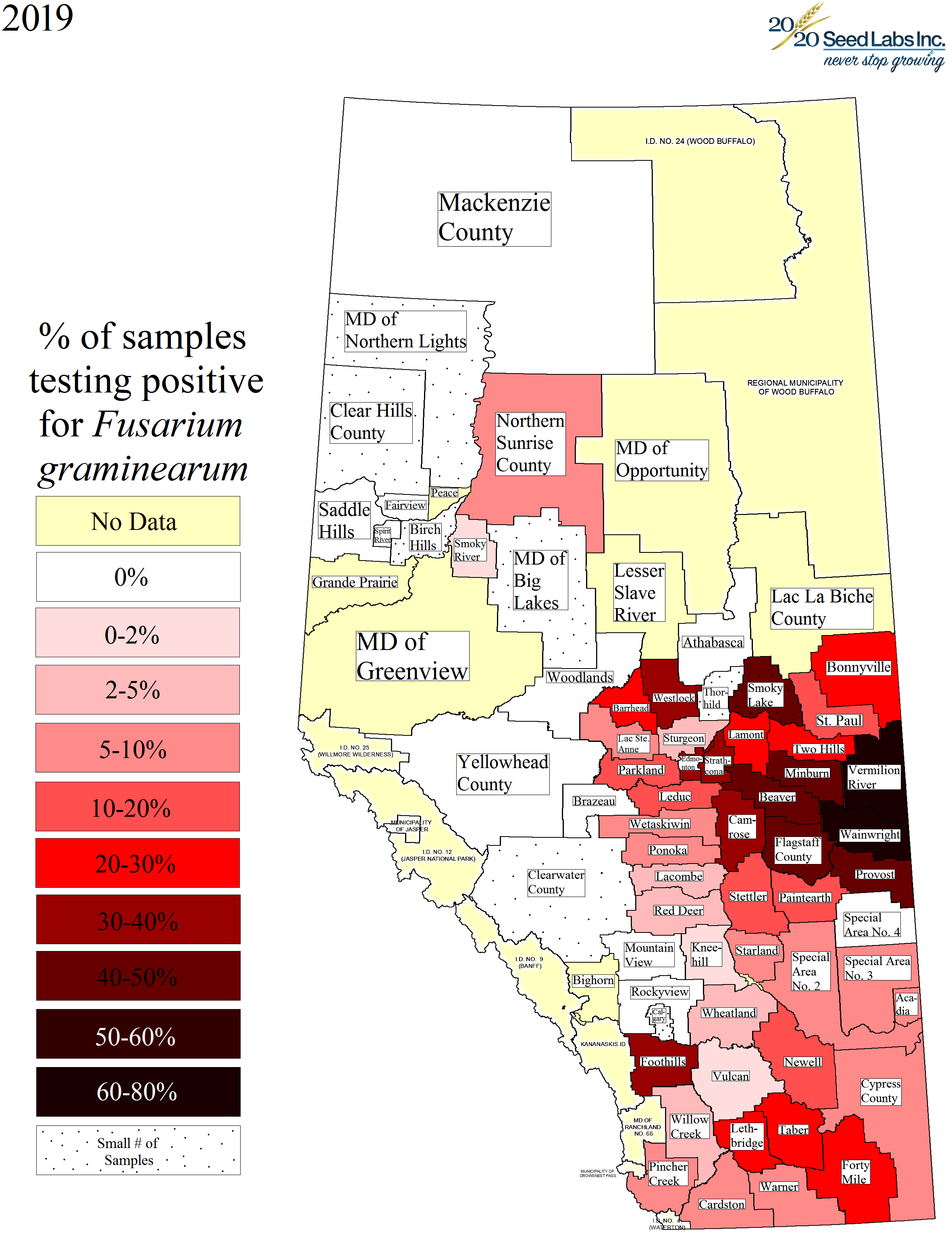 2019 was a wetter year and so we saw an increase back up to almost as much we saw in 2016, with about 19.9% of samples across the province testing positive for F. graminearum. A big difference from 2016 was that the highest % of positive samples are now East of Edmonton along the border with Saskatchewan: the County of Vermilion River and MD of Wainwright. Because Southern Alberta did not receive the high amounts of precipitation that Central Alberta received, a much lower percentage of positive samples came from the South in 2019.

The map for 2020 continues to be added to until the testing season ends in May. At the point of writing this article about 16.5% of samples are testing positive for F. graminearum across the province. This is the third highest historical percentage since we started collecting data in 2007. The distribution across the province thus far is similar to 2019 with the highest % counties East of Edmonton along the Saskatchewan border. Until the final map is created, the interim maps are only available to subscribers of The Incubator newsletter.

Sign up at: https://2020seedlabs.ca/the-incubator/ to get access to exclusive statistics and maps tracking not only F. graminearum but other pathogens as well as statistics and information from our other departments.